In the last post we had finished creating our measure and measure group and in the post before that we created a dimension. However our cube is still not ready to answer the question posed by the Business. In order to show the count of order against each card type we now need to establish a relationship between the dimension and the measure we created earlier.

On clicking the button next to Credit Card ID (which is the key column of the dimension and the column within the measure on which the data is being joined) we see the type of relationship that has been established. 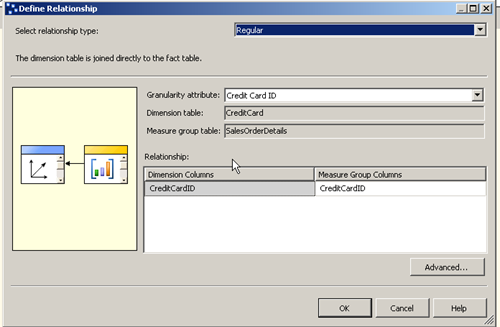 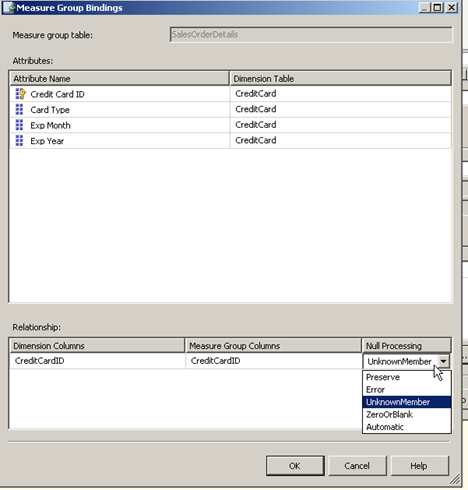 This screen summarizes the information about what dimension columns are participating in this relationship. The most important option in this screen is the use of the Null Processing drop down. Frequently in an OLAP system there will be a number of data quality issues that need to be addressed, these could be because of human error, machine error or just a delay in getting the data synced. In such cases there is always a possibility that a measure may contain a value which doesn’t exist in the dimension. Normally in a traditional database this would result in a Primary Key foreign key violation and would not be possible. However when it comes to data warehousing we need to still retain this information in order to make sure the results are accurate. We can do this by setting the Null processing option, usually we would default to Unknown since the value is not defined (the traditional meaning of NULL). Else we have other options such as Preserve in which case the value is stored as it is but won’t map the dimension. Error means we get errors similar to the database. Zero or Blank means the value gets default to 0 or Blank value and Automatic is the default options as specified by the user. Let us leave it at Unknown member and press OK.