This blog is the first in a series on the topic of SQL Server replication. The topics are the same for the most part for SQL Server 2008 R2 or 2012. In case there are any obvious differences we will call them out as we go along.

Replication is one of Microsoft SQL Servers high availability solutions. It copies data from one server (publisher) to multiple other servers (subscribers) using a facilitator database called the distributor. Replication uses terminologies used within the publishing industry such as publisher, article, subscriber etc. Replication is usually not implemented as a standalone high availability solution because it doesn’t support automatic failover. However this drawback is easily overcome by implementing mirroring on the publisher. The biggest advantage of using replication is that it supports scalability within SQL Server. A common scenario where replication is used is when dealing with multiple users, usually 100’s or 1000’s of users connecting to a datawarehouse. Replication is usually implemented in the below three formats:-

Transactional replication: – a mechanism of moving over changes from the publisher or primary server into multiple destination servers called subscribers; this creates multiple read only copies of the data which helps offload read only loads on the database tables.

Merge Replication: – A form of replication where the data can flow in both directions. Usually used when dealing with remote applications that needs to send information such as order status back to a central database. This is usually implemented in mobile application.

Replication supports moving data from heterogeneous database such as Oracle etc. All the above methods of implementing replication depends on the use of agents which are scheduled to run and move changes either from one server to another or from a server to a client.

Article: – A table which is being monitored for changes or basically the table in which changes are made that need to be sent or replicated to other systems is called a Article. A group of such article is called a publication.

Subscription: – A subscription is a kind of rule that decides which objects from the publisher get synced with what objects in the subscriber. Essentially it plays the opposite role of the publication. 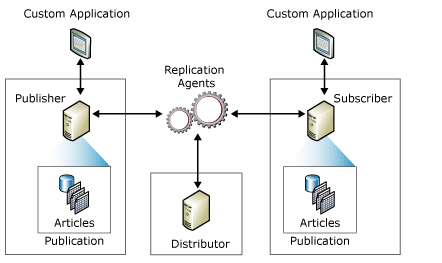