During the lockdown I started rereading Stephen Fry’s Mythos. A modern interpretation of the Greek myths with the trademark Fry Humor. Greek mythology like most ancient literature is dotted with characters related to each other in a number of ways and presented a great opportunity to create a Graph database of the different characters and how they are related to each other. Another popular Graph database is the one about Marvel Comics Universe. Where every marvel comic character and their role in universe has been documented.

In this post I try to provide something similar to store details of the Greek Mythological characters. I am only half way through the book and this book doesn’t even talk about the Hero’s (Hercules etc.) So expect the dataset to increase in future. I will be providing access to a copy of the data once I am done with the first book.

The below visual was created using the Force Directed Graph which can be downloaded here. Unfortunately the visual can’t read directly from Node and Edge table SQL Server so you will need to create a view defining the way the node and edges are related. Here is a simple example of the view I created to define first level connections.

The below screenshot is an example of what has been inserted so far into the database. Bigger the circle the more connections they have. 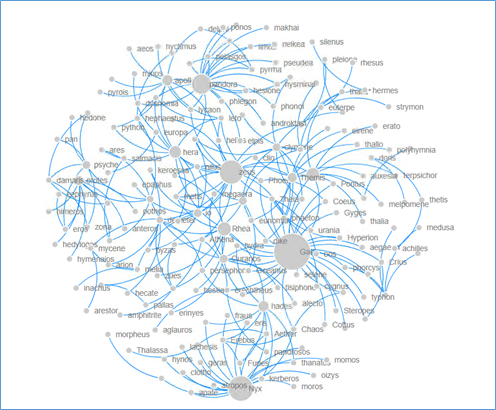 The below screenshot show characters affected by Hera in one way or the other. 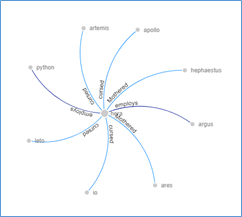